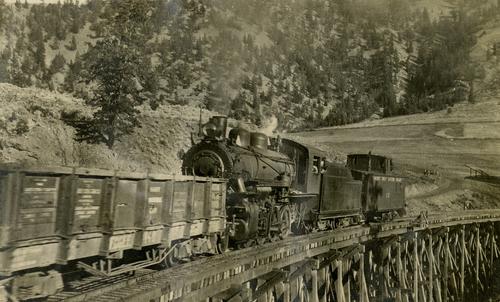 Photograph depicts a Pacific Great Eastern Railway train on Pavilion Creek trestle at Mile 20.3. The train includes Locomotive #56, built by Canadian Locomotive Company of Kingston, Ontario, in August 1914, together with caboose C2, built by National Steel Car of Hamilton, Ontario in 1914 and a “Hart Convertible Car” #140 stencilled with indeterminable initials. These cars were convertible gondolas which were used as ballast cars with the ability to dump ballast either between or outside the rails depending on whether the centre floor doors or the side doors were opened. This particular car, which was scrapped in 1949, was part of a group of 15 cars remaining in number series 131 - 195 (not all numbers used) known on the PGE as “Red Harts” to distinguish them from a somewhat more modern version in number series 201 - 240 (again, not all numbers used) known as “Black Harts”.

The ca. 1921-1927 “PGE Bridge List” from the notebook of William H. Hewlett (1914-1968) references a 389.4 foot long, 34 ft. high, framed trestle with 26 spans of 14.8 feet at Mile 20.3 carrying the line over Pavilion Creek. There was a water tank at Pavilion located between the North end of the siding and the South end of the trestle. A track profile chart confirms that the track at this point is on a 12 degree curve.