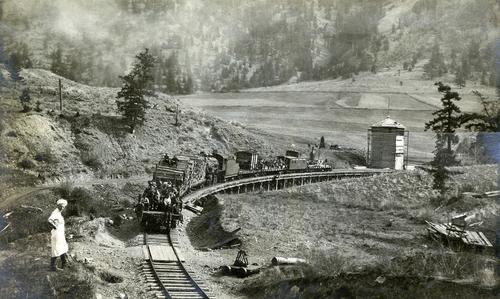 Photograph depicts a Pacific Great Eastern Railway work train on Pavilion Creek trestle at Mile 20.3. laden with workers, railway ties, and a steam donkey. The work train may be returning to a work camp, as a man dressed in the attire of a camp cook is standing beside the track.

The ca. 1921-1927 “PGE Bridge List” from the notebook of William H. Hewlett (1914-1968) references a 389.4 foot long, 34 ft. high, framed trestle with 26 spans of 14.8 feet at Mile 20.3 carrying the line over Pavilion Creek. There was a water tank at Pavilion located between the North end of the siding and the South end of the trestle. A track profile chart confirms that the track at this point is on a 12 degree curve. This photograph was taken at trackside. The structures at the lower left of image 2020.08.82 are consistent with a small construction camp, which accounts for the presence of a camp cook in this image (2020.08.83).