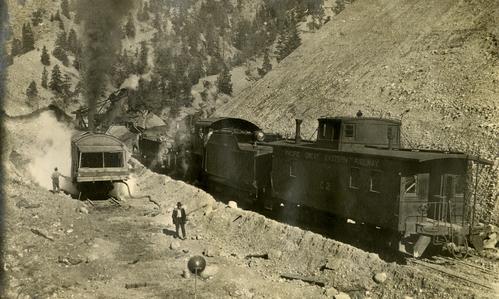 Photograph depicts a Pacific Great Eastern Railway locomotive, caboose (C2), and train cars operating as a work train, possibly on the south side of the Sallus Creek cut. A steam shovel may be loading gravel to or from the train cars. Location appears to be around the Lillooet area. The locomotive appears to be #56, a Canadian Locomotive Corporation 2-8-0, which was later lost in an Anderson Lake accident on August 8, 1944.