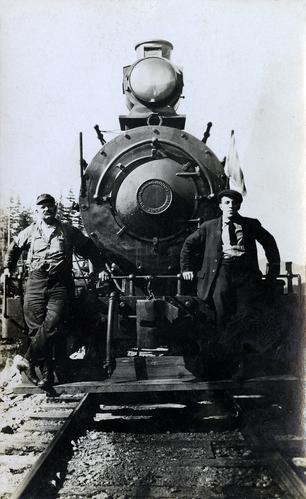 Photograph depicts the Pacific Great Eastern Railway #3 locomotive from the Davenport Locomotive Works. Two railway workers lean against the front of the locomotive for a posed portrait. The individual at left may be Angus McRae, a PGE locomotive engineer.

More information about the locomotive, Pacific Great Eastern #3:
The locomotive was built by Davenport Locomotive Works in Davenport, Iowa in February 1914, serial number 1477, for Patrick Welch, one of the developers (Foley, Welch & Stewart) of the PGE railway. Most of the early equipment, although lettered with the Pacific Great Eastern name, was owned by Patrick Welch. The Provincial Archives in Victoria holds a document showing that Welch sold all the equipment to the newly incorporated Pacific Great Eastern Equipment Company, of which he was also a director, on 14 June 1916 in exchange for 6000 shares in the company. Much, if not all, of the equipment had PGEEC "ownership plates" applied during the 1916-1918 period. It was not until the Provincial Government acquired the railway (and the Equipment Company) in 1918 that the equipment actually became the property of the railway. Pacific Great Eastern #3 was a switching locomotive with an 0-6-0 wheel arrangement and eight-wheel tender built to a standard Davenport design.