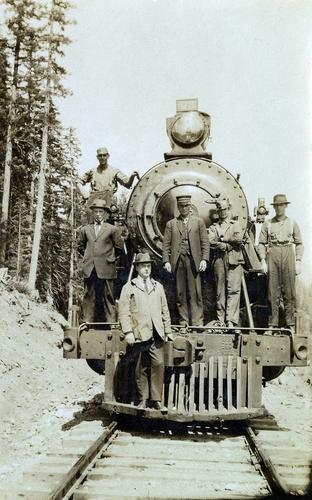 More information about the locomotive:
Pacific Great Eastern #52 locomotive was built by Montreal Locomotive Works in 1913 and delivered to the PGE in November of that year together with a second identical locomotive, Pacific Great Eastern #51. They were relatively light road locomotives of the Consolidation type (2-8-0 wheel arrangement) and, prior to dieselization of the railway in the late 1940s - early 1950s, were the only Montreal-built locomotives the railway owned. All subsequent steam locomotives built new for the Railway came from the Canadian Locomotive Company in Kingston, Ontario. There were also two earlier second-hand locomotives which the PGE acquired when it took over the Howe Sound & Northern Railway (previously the Howe Sound, Pemberton Valley & Northern Railway) and two additional steam locomotive purchased second-hand from the U.S.