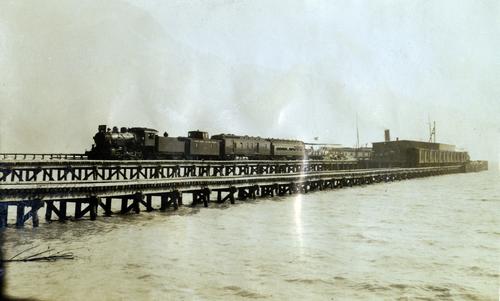 Photograph depicts a Pacific Great Eastern Railway train on the original dock at Squamish (Newport); the vessel in the distance behind the warehouse is quite likely the "MV Ballena", the subject of photograph 2020.08.01.

Additional information on baggage-mail cars 51 & 52 and coaches 2, 3 & 4:
Baggage and mail cars 51 and 52 were purchased from E.H. Wilson & Co. of Philadelphia at a total cost of $2806.74 each. They were received on line June 4, 1915 and were barged to Newport on June 8. These cars had a length of 64 ft. over buffers, an inside length of 60 ft. and an inside width of 9 ft. 2½ in. and rode on 6-wheel trucks. Although not confirmed, these cars are believed to be of Pennsylvania Railroad heritage with PRR Class MM baggage and mail cars being the most likely candidates. Certainly, all the other cars purchased from E.H. Wilson & Co. were ex-Pennsylvania and the gasoline lighting system with which these cars were delivered was used extensively by the PRR.

The original negative for this photograph is believed to exist in the collection of Edward (Ted) Luke, a former PGE employee and the author of "A Railway a Small Town and Me". Additional prints of this photograph exist in other collections.

Item is digitized and available in high-resolution TIFF and JPEG formats. The digital access JPEG available here has been retouched for increased visibility.

Information about this photograph and the equipment provided by Greg Kennelly, amateur PGE historian, based the following sources: