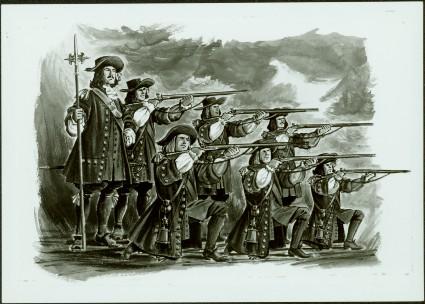 Typed annotation glued to verso of photograph reads: "Le Régiment de Carignan-Salières - 1665. This famous regiment was dispatched to Canada (then called New France) by King Louis XIV and disembarked from its small sailing vessels on eastern shores in the spring of 1665. Historically it was an important event. Until then, the colonists had been obliged to provide their own defence and the French regiment was the first military protection they enjoyed."