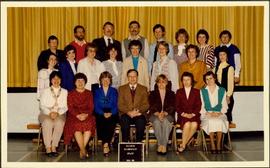 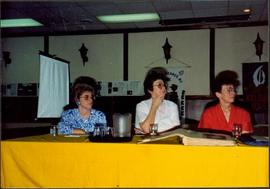 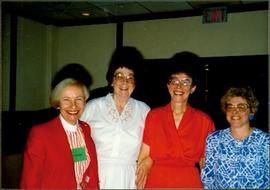 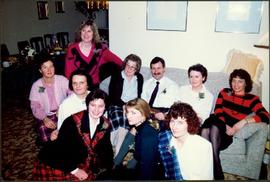 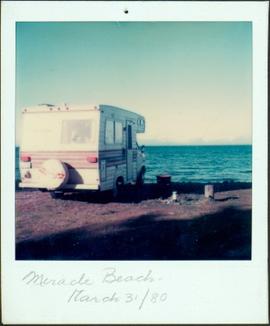 File consists of: Record of Employment with University of Victoria (1978) Christmas and Retirement cards Copy of front page of the New York Tribune newspaper, (Saturday, September 1, 1923) Transcript of "Song for John Stevens - Retiring from SD #57 - 1996" Autograph page for Bridget Moran (Jan. 20, 1947?)Guest book (Dec. 18, --) Letter certifying University of Toronto Graduate School attendance by Bridget Moran (June 6, 1963) and University of Toronto Graduate Transcript, 1950 Letter from Health and Welfare Canada Income Security Programs to Bridget Moran re: her receipt of Old Age Security pension (1988) Bridget Moran's Record of Employment with School District #57 (1988) Letter from Garry Hartley, Coordinator of Curriculum Development and Implementation with School District #57 to Bridget Moran re: credit in an upcoming publication (Nov. 30, 1990) Business card with School District 357 Unsigned personal letter to Bridget Moran (Dec. 2, 1988)Excerpt from School District newsletter re: retirement news 5 Photographs: Group photo of Quinson Elementary Staff, 1985-1986; Bridget Moran and two unidentified women sitting at a table: a pitcher of water and a large opened book lay in front of them; Group photo of Bridget and three other unidentified women; Group photo featuring Bridget Moran and nine other people posed in a living room; A camper parked at Miracle Beach, March 31, 1980Invitation from Director of Personnel for School District #57 to Bridget to attend an "Employee Recognition Ceremony" to be held in her honour (April 14, 1989) Letter from Jo-Anne Brown, Personnel Supervisor for SD #57 acknowledging receipt of Bridget's letter of retirement. (April 19, 1989) Letter of thanks for Roy Stewart, Chairman of the Board of School Trustees to Bridget on the occasion of her retirement. Programme for College of New Caledonia's 1998 Convocation and Bridget's speech to this assembly in her role as Representative of the College Board.

Part of the Bridget Moran fonds