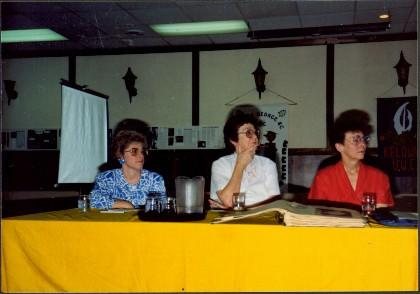 Photograph depicts Moran seated between two unidentified women at table with pitcher and large open book in front of them. Projection screen stands midground, banners hang on wall in background. Photograph taken during a three day meeting of the B.C. Council of the Canadian Federation of University Women, to honour the 25th anniversary of the Prince George club, and release the new edition of their book 'Prince George Street Names: Our History'. Handwritten annotation on recto of photograph: "4-5 Conf".