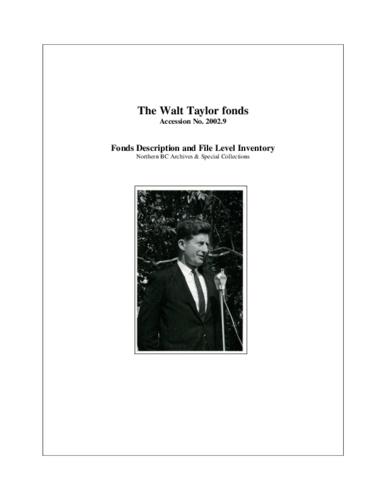 Born in Longmont, Colorado on 10 March 1919, environmentalist and social activist Walter (Walt) Taylor devoted a lifetime in the U.S.A. and Canada to the cultivation of peace with justice. During World War II he served in work camps as a conscientious objector to war, but ultimately went to prison for his stand against conscription. He turned away from graduate study in Physics to take a Master’s degree in Human Development at the University of Chicago.

With four children in their family, he and his wife Margaret (Peggy) Taylor (b. Lewiston, Maine, 7 August 1916) worked in a variety of social services, but were always seeking opportunities to encourage a fundamental movement toward peace with justice and sustainable environmental stewardship.

In the 1960s Philadelphia Quakers sent Walt as their response to a request from the Seneca Nation of Native Americans for help in defending the oldest active treaty in American history, the Treaty of Canandaigua which had been firmly negotiated with the Seneca Nation in 1794. In spite of a great nation-wide protest, that treaty was violated by the construction of the controversial Kinzua Dam (1961-1965) on the Allegheny River which flooded 10,000 acres of land and displaced 600 Seneca families out of their traditional territory. After moving to Summerland, British Columbia during the Vietnam War, Walt continued his active interest in the concerns of First Nations peoples and even worked for the Union of B.C. Indian Chiefs in the 1970s.

Beginning in 1973 and running for several years thereafter, Walt directed an innovative project called “Imagine Penticton” through which the whole community of Penticton was invited to imagine itself the way it ought to be and to join Walt and his staff in bringing this collective vision to fruition. Taylor was also actively involved with the South Okanagan Civil Liberties Society, the South Okanagan Environmental Coalition and the Southern Interior Ecological Liaison – venues which allowed him to further his passionate advocacy for justice, peace and environmental sustainability.

His time in the Okanagan region of B.C., also provided Walt Taylor with the opportunity to become heavily involved with the British Columbia Man and Resources Programme – a 2 year public participation programme sponsored and organized by the Canadian Council of Resource and Environment Ministers (CCREM). The Man and Resources Programme originated in 1961 when natural resource ministers from across the country met at the “Resources for Tomorrow” Conference to discuss a natural resources policy for Canada. At that time, public interest in resource issues was low, so the main results from that conference were strictly governmental and technical. Man and Resources was concerned with all aspects of the environmental problem – social, economic, ecological – but it also sought to involve all Canadians in its investigation; therefore one of the fundamental goals of this Programme was to enlist citizen participation to discuss the whole question of development and the use of resources and how that should be balanced against protection of the environment. This mandate was to be accomplished through two phases: Phase I was undertaken in 1972 when community representatives from across the province came together locally, then regionally (Delta, B.C., Sept. 23-23, 1972) and finally nationally (Montebello, Q.C., Oct. 29-Nov. 4, 1972) to take on the task of problem identification. In 1973, Phase II was undertaken which required citizen participants to identify solutions and alternatives to the problems identified at the national conference at Montebello in 1972. The provincial conference was held in Naramata, B.C., September 20-23, 1973 while the national conference was held in Toronto, Nov.18-23, 1973.

In 1982 Walt and his family moved north to Smithers, B.C. where he continued to dedicate his life to grass-roots level, political and environmental activism in the Bulkley Valley - Telkwa - Smithers area. For the next eighteen years Walt Taylor, and his wife Peggy, were actively involved with the Northwest Study Conference Society, the Skeena Round Table on Sustainable Development, the Waging Peace Society, Project Ploughshares – Smithers, the Smithers Human Rights Society, the Gitksan-Carrier Tribal Council, the Gitksan-Wet’suwet’en Tribal Council, the Telkwa Educational Action Committee of Householders, the Bulkley Valley Anti-Poverty Group, and the Smithers Social Planning Committee, to name a few, through which they promoted a wide range of social rights causes including global peace, human rights and environmental sustainability to peoples, organizations and communities throughout Northern B.C.