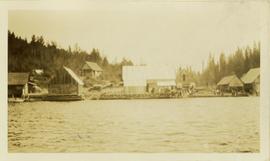 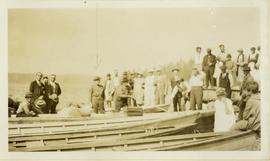 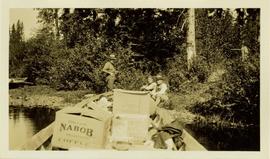 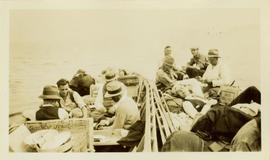 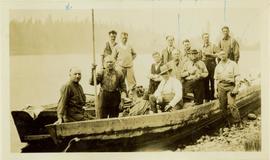 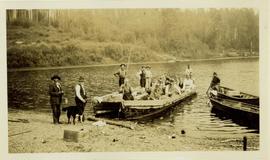 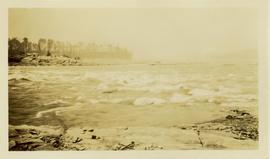 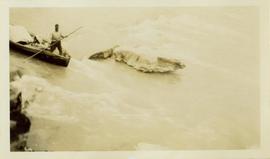 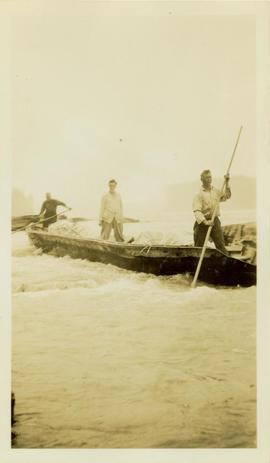 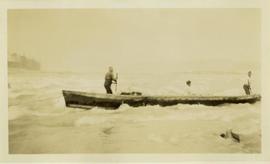 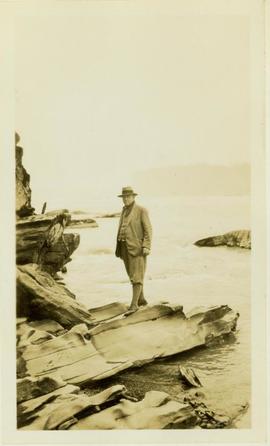 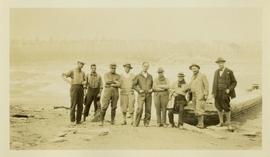 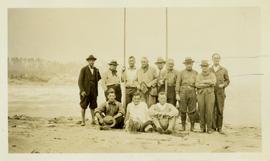 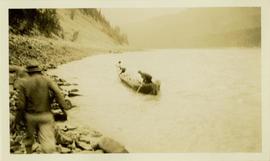 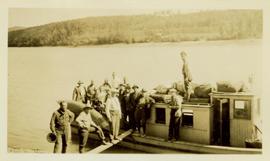 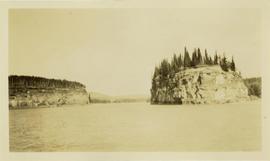 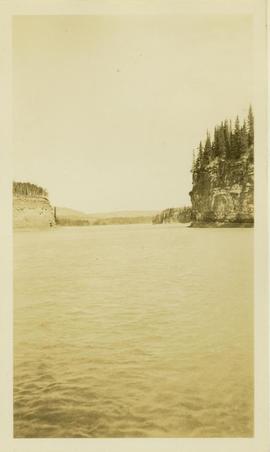 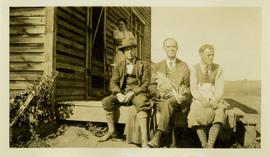 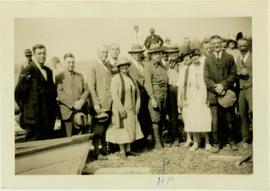 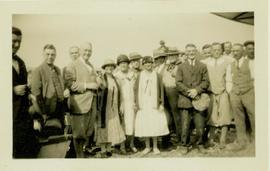 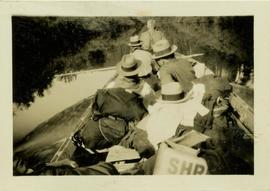 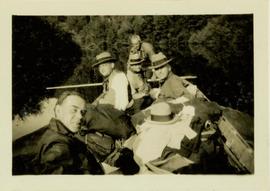 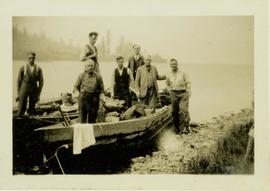 This collection consists of 1 photo album originally belonging to Sydney E. Junkins which contains 23 photographs and 4 large folding maps which depict Hon. Dr. King and party's trip down the Peace River from 19 to 31 August 1927. Includes a hand-written and typed copy of "Peace River Trip" itinerary for a subsequent trip 8-15 September 1927.

1) Born in Chipman, New Brunswick, James King was the son of George Gerald King, a businessman and Canadian politician in his own right. The elder King was a Liberal Member of Parliament in the nineteenth century, and a Senator from 1896 until his death in 1928.
The younger King earned his MD from McGill University in 1895. After practicing medicine for a short period in New Brunswick, he moved to the Kootenay region of British Columbia in 1898 serving a large rural territory. In 1910, he attended an international medical conference in Budapest, and played a leading role in establishing the American College of Surgeons in Chicago, serving as a governor of the college. In 1932, he was created a Knight of Grace of the Venerable Order of the Hospital of St. John of Jerusalem for his services to medicine.
In 1903, King was elected as a British Columbia Liberal Party member of the British Columbia Legislative Assembly for the riding of Cranbrook and was re-elected in 1907 before leaving provincial politics in 1909 to return to medicine.
A supporter of Sir Wilfrid Laurier, King was a Liberal candidate in the 1911 federal election but was defeated in the riding of Kootenay. He returned to the provincial legislature in 1916, joining the provincial cabinet as Minister of Public Works. He served in that portfolio until 1922 when he was offered a federal Cabinet position by Prime Minister William Lyon Mackenzie King. J.H. King became Minister of Public Works shortly before winning a by-election to enter the Canadian House of Commons as MP for Kootenay East.
In 1926, King became Minister of Soldiers’ Civil Re-establishment and Minister Responsible for the Department of Health. In 1928, he became the country's first Minister of Pensions and National Health. He was appointed to the Senate on Prime Minister Mackenzie King's recommendation on June 7, 1930, shortly before the defeat of Mackenzie King's government.
In 1942, King returned to Cabinet as Leader of the Government in the Canadian Senate. In this capacity, he attended the June 1945 San Francisco Conference that established the United Nations. In August 1945, he was appointed Speaker of the Canadian Senate chairing sessions of the Upper House until 1949. He then served as co-chairman of the joint Senate-House of Commons Committee on Old Age Security which reported in 1950. King remained a Senator until his death in 1955.
[Biographical information taken from Wikipedia located at http://en.wikipedia.org/wiki/James_Horace_King and accessed January 13, 2009] . - 2)Harry George Perry was this city's second mayor, succeeding W.G. Gillett in 1917. Harry George Perry was the mayor of Prince George in 1917, 1918 and 1920. Perry came to Prince George on the BX Sternwheeler in May of 1912.
In 1914, when the first Grand Trunk Pacific Railway Train came to our city, Perry became president of the board of trade. Perry was a skilled politician and orator who also chaired the Prince George incorporation committee. Perry founded the local faction of the Liberal Party, and was elected to represent the city of Fort George in the provincial election of 1920. Perry served numerous years as speaker of the legislature, becoming Speaker of the House in 1933 and was eventually given the position of Minister of Education in 1940. Perry convinced John Hart to construct a highway north from Prince George through the Pine Pass (connecting the Peace River Block with the remainder of British Columbia). Perry played an instrumental role in the extension north from Quesnel of the Pacific Great Eastern Railway. Perry published and owned the Prince George Citizen, the Rupert Daily News, and the Nechako Chronicle for a number of years following his time in office. Harry George Perry died in December of 1959. Perry Subdivision is named for Harry George Perry.

[Biographical information taken from the City of Prince George website located at http://www.city.pg.bc.ca/cityhall/councilinfo/mayors/harrygperry/ and accessed January 13, 2009].