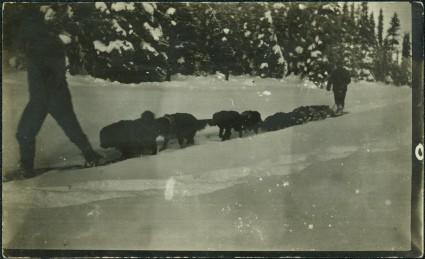 Photograph depicts a man in snowshoes leading a line of dogs pulling supplies on a toboggan. The second figure, walking behind dogs, is believed to be a man named Fred Burden. Forest trees in background. Handwritten annotation on recto of photograph reads: "Billy Seymour at toboggan". Billy Seymour was a South Fort George man of First Nations descent, employed by the Hudson's Bay Company, and well-known for his ability and endurance in land travel by foot.

Item is part of the Taylor-Baxter Family Photograph Collection.

See annotated Ripley's "Believe It Or Not" newspaper excerpt regarding Billy Semour, and other associated ephemera.