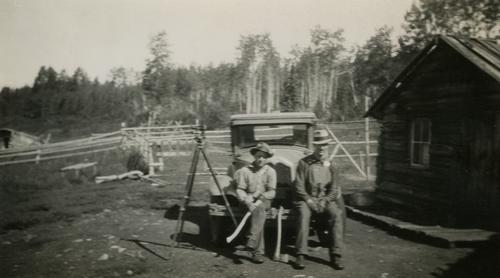 Jack Lee and Gordon Wyness with survey equipment on reserve

Photograph depicts (from left) Jack Lee and Gordon Wyness sitting on a car next to their equipment while surveying at an Indian Reserve. A cabin on the reserve is also depicted. According to the transcription on the photograph verso, they were surveying road through an "Indian Reserve South of South bank François Lake".

Historical language note: The creator's original transcription on this photograph includes the term "Indian”. In Canada, while the terms “Indian" still remains a legal designation articulated via the “Indian Act,” it is generally considered offensive when used by non-Indigenous peoples. As well, the application of such pan-Indigenous terminology continues to marginalize and nullify the diversity of Indigenous cultures, governance and knowledge systems which exist across the American continents. Whenever possible, Northern BC Archives staff will include the name of the individual and/or Nation of the Indigenous person/community represented in the archival documentation. When not possible, the term First Nations, Inuit or Métis will be applied as appropriate and efforts to create more accurate descriptions will continue. Please see our Statement on Language in Archival Descriptions for more information on how the Northern BC Archives is working to address harmful language use within the archival and historical record.