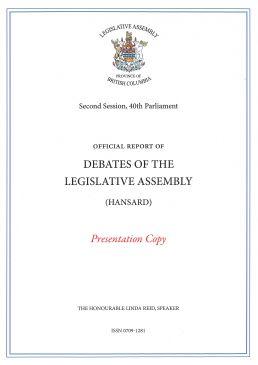 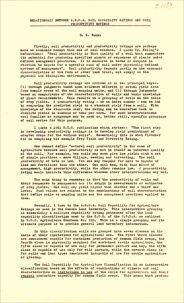 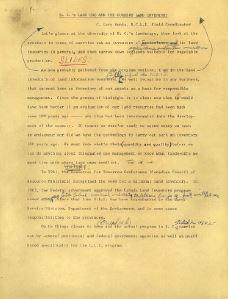 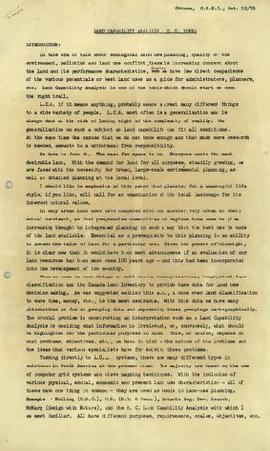 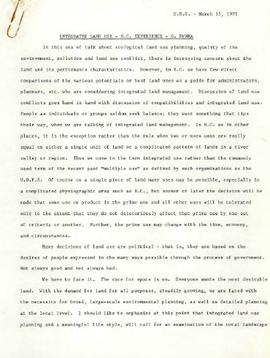 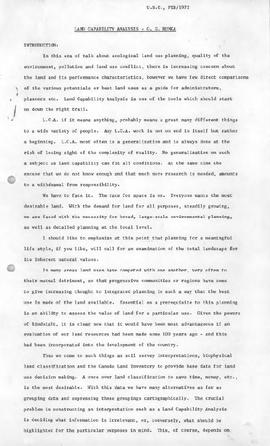 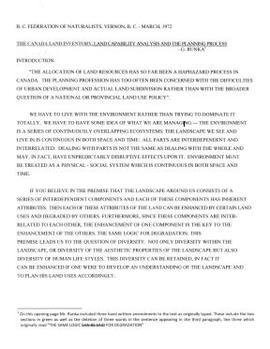 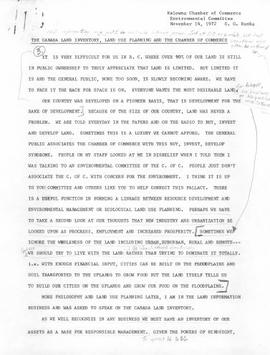 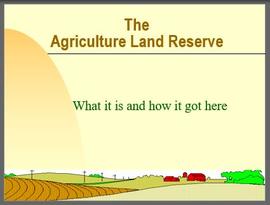 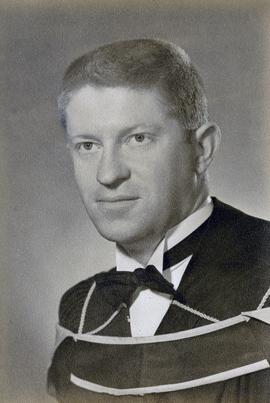 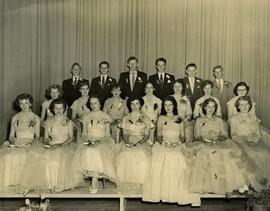 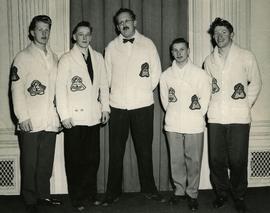 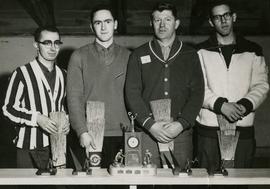 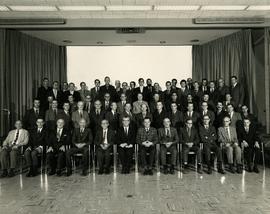 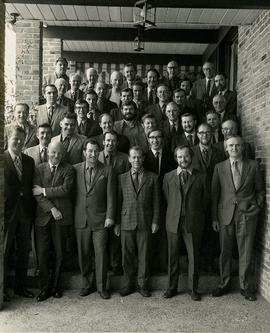 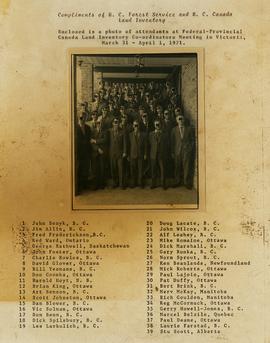 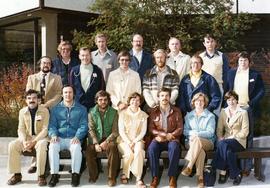 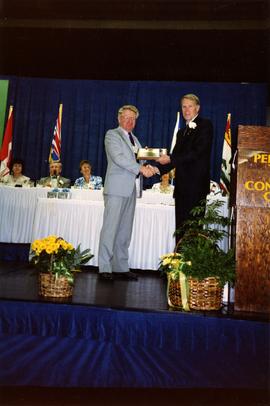 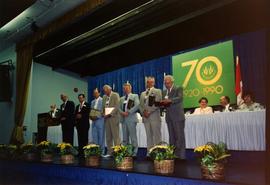 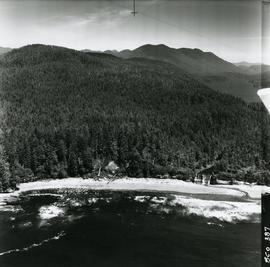 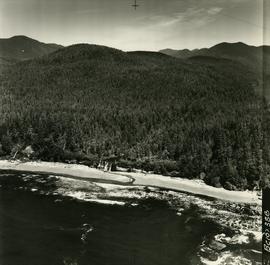 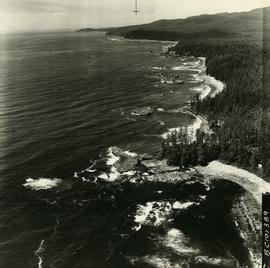 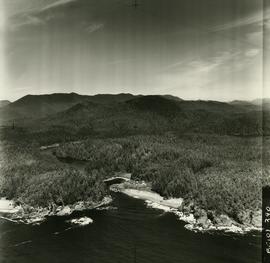 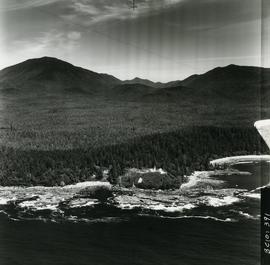 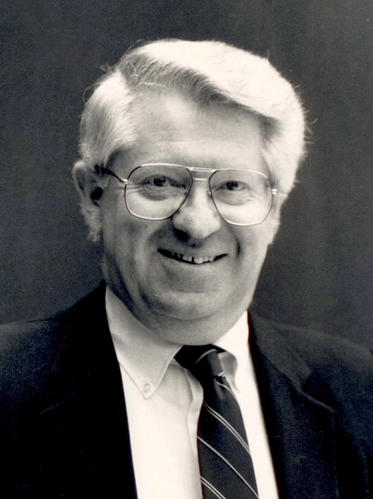 20 m of textual records and other material

George Gary Runka's contribution to land inventory, agriculture, natural resource management and land use planning helped shape British Columbia land use policy over five decades. Best known for his guiding role in the development of the British Columbia Agricultural Land Commission, Gary Runka was its first General Manager and later Chairman. In his later career, his land consultancy work Gary was dedicated to the use of field knowledge as the basis for understanding and resolving land and water use issues. Described by colleagues as "one of the most highly respected agrologists in our profession" and "one of [BC’s] most dedicated and influential land use planners", Runka had a 52-year career working on (or against) an incredible number of landmark projects in British Columbia, such as the Site C Project.

Gary Runka was born August 2, 1938 and grew up in Baldonnel, near Fort St. John in the Peace River area of British Columbia. Growing up on a farm homesteaded by his parents, Bill and Velma Runka, Gary developed an early and deep connection to agriculture and the natural environment. Gary played baseball, hockey, curling and later in university, football. In 1968, Gary became the owner of a cereal/forage seed/oil farm near Fort St. John, which he owned until 2005.

Gary’s early employment experiences included work for legal land surveys and a petroleum exploration survey. These experiences were significant influences that tweaked his interest and steered Gary toward land science and management. He attended the University of British Columbia from which he graduated in 1961 with a Bachelor of Science degree in Agriculture majoring in Soil Science. Upon graduation he took a position as Pedologist with the BC Ministry of Agriculture (1961-1966), mapping and classifying soils in many areas of the province and providing soil inventory and land use interpretations for tax assessment, forest management, irrigation engineering and agricultural development. He briefly interrupted his career to complete a Masters of Science degree in Natural Resource Management and Land Use Planning from Cornell University, graduating in 1967. After his return to British Columbia, he was appointed BC Land Inventory Field Coordinator for the Canada Land Inventory program (1967-1973).

In 1972, the people of British Columbia elected an NDP government. The NDP introduced some significant new programs, including a government-owned vehicle insurance company (ICBC), a provincial ambulance service and a community college system. Perhaps the most dramatic of all, however, was the “land freeze” and the subsequent passage of the Land Commission Act. Intended to protect what remained of BC’s scarce agricultural land, approximately 47,000 square kilometres (18,000 sq mi) of land with soils and climate to support food production was eventually designated as BC’s Agricultural Land Reserve (ALR). At the time, it was considered the most progressive piece of planning legislation of its kind in North America and to this day, continues to remain a model looked to by many other jurisdictions that continue to lose their valuable agricultural land to non-farm development.

Gary Runka was the first general manager of the British Columbia Land Commission. He was formally appointed via Order in Council 2570/73 on August 1, 1973. Gary's appointment to this pivotal position with the new Commission occurred about 3.5 months following Royal Assent of the Land Commission Act on April 18, 1973 and about 2.5 months after the appointment of the original five-person Commission. He held this position until his permanent appointment as a member and Chairman of the Commission on July 24, 1975 (OIC 2445/75), replacing W.T. Lane, the first Commission Chairman. A combination of background, education and work experience made Gary uniquely qualified to guide the Commission through its formative years.

Gary was hired as the first General Manager (1973-1975), and later as Chair (1975-1978), of the Land Commission. Against incredible odds, Gary guided the Commission with skill and integrity through its first tumultuous years. There were controversies around what lands should be protected within the ALR. There were debates around how much land should be left out of the ALR for immediate community expansion needs, while local governments undertook the task of amending their Official Community Plans and servicing plans to direct growth away from agricultural land. Once the ALR boundaries were designated, almost immediately, applications for subdivision and exclusion began pouring in and several ‘fine-tuning’ projects were undertaken to increase the integrity of the boundary.

Gary never wavered in his dedication to preserving BC’s agricultural land resource. In 1979, when the government overruled the Land Commission and allowed the exclusion of over 250 acres from the ALR in Langley for industrial development, Gary stuck to his principles and resigned. The ensuing controversy damaged the reputation of the political leadership and is regarded as one of the contributing factors to the continued survival of the ALR.

Upon leaving the Land Commission, Gary established his own consulting company, appropriately named G.G. Runka Land Sense Ltd. Over the next 34 years, Gary worked with 681 clients, including all levels of governments, corporations, First Nations, non-government organizations, learning institutions and private individuals. Whether the project was land inventory, community planning, environmental assessment, policy development, land and water use regulation or resource use conflict resolution, Gary always approached planning from the ground up, combining his understanding of natural systems and ecological processes with his diplomatic skills to bring people of diverse opinions together to solve problems in the long-term public interest. Gary was a skilled and respected facilitator of complex land use planning processes throughout his career. He brought people together to cooperate and resolve contentious issues with the objective of facilitating solutions that not only reflected various values and interests, but also land and water use planning principles. Gary Runka left a great legacy to the land, water, and people of British Columbia by helping decision makers and communities make good land use and agriculture policy.

It was just such talents that The Nature Trust of British Columbia needed for an innovative project they undertook in the 1990’s. In an effort to conserve some of the unique biological resources of the South Okanagan, one of the three most endangered ecosystems in Canada, the Trust purchased a number of small private holdings along with three ranches, including their Crownland grazing leases and licenses. The big challenge then was to derive an overall management plan for the thousands of acres of secured habitat. Gary was ideally suited to the task. Countless collaborative hours were spent sorting out land status designations, resource capabilities and the competing objectives of diverse interest groups. The final product, which Gary coined "Biodiversity Ranches", was heartily endorsed by all of the stakeholders, including the ranchers, who are still managing these properties today.

During the 1990s, Gary played a key role in yet another ambitious BC land use planning initiative, the Commission on Resources and the Economy (CORE) and subsequent Land and Resource Management Plans (LRMP). As facilitator for several of these processes, including in the East Kootenays, Bulkley Valley, Anahim and Charlotte-Alplands, Cassiar/Iskit/Stikine and Central Coast, Gary’s legendary geographical memory, integrative abilities and diplomatic skills helped guide these multi-sector tables to consensus. British Columbians, both present and future, will forever benefit from the doubling of parks and protected areas that was one of the key products of this monumental planning exercise.

On July 26, 2013, Gary Runka died suddenly and unexpectedly while walking with his wife, Joan Sawicki, near their home. He was honoured posthumously for his contributions to British Columbia sustainable land use with the 2014 Land Champion award from the Real Estate Foundation of BC. His contributions were also honoured throughout his career; he was the recipient of the B.C. Institute of Agrologists’s 1978 "Agrologist of the Year" award and a 1990 recipient of a Fellowship of the Agricultural Institute of Canada.

Joan Sawicki was born in Burnaby, British Columbia in 1945. The family moved to Terrace, B.C. in 1956. In the 1960s Sawicki attended the University of Victoria earning a B.A. in Education in 1968, majoring in both history and geography.

Sawicki began her career as a secondary school teacher in Williams Lake from 1968-1969 and in Armstrong from 1971-1972. Sawicki gradually developed an interest in environmental and agricultural issues. She eventually worked in Ottawa and in British Columbia for the Ministry of Agriculture and the British Columbia Agricultural Land Commission. Prior to her career in civic and provincial politics, Sawicki was a partner in her husband G. Gary Runka's land-use consulting firm, G.G. Runka Land Sense Ltd., dealing with natural resource management issues.

Sawicki was the NDP candidate in the riding of Burnaby-Willingdon in the 1986 provincial election but was defeated by Elwood Veitch, a minister in the Social Credit government. She was elected in the same riding in 1991, and re-elected in 1996. She served as MLA for Burnaby-Willingdon from 1991-2001. Sawicki was elected speaker of the Legislative Assembly in March 1992, serving for two years. She was forced to resign as Speaker by Premier Mike Harcourt in 1994. She then served as Parliamentary Secretary to the Minister of Municipal Affairs from April 1994 to May 1996, and to the Minister of Environment, Lands and Parks from June 1996 to January 1998. She resigned from her position over issues concerning a proposed land development project that was to take place on protected land under the Agricultural Land Reserve at Six Mile Ranch near Kamloops.

In July 1999, Glen Clark named Sawicki to cabinet as Minister of Environment, Lands, and Parks. She retained her portfolio when Ujjal Dosanjh became premier. She announced in October 2000 that she would not seek re-election, and relinquished her portfolio on November 1, 2000.

In July 2001, after 30 years of residence in Burnaby, Gary Runka and Joan Sawicki moved to Stuie, BC where they continued their land consultancy work with their G.G. Runka Land Sense Ltd. business until Gary Runka's death on July 26, 2013.

This fonds illustrates the life and work of G. Gary Runka and his contributions to the province of British Columbia. Gary Runka was the first General Manager of British Columbia's Agricultural Land Commission and helped establish the provincial Agricultural Land Reserve. After transitioning from a government career to private consulting, Runka provided comprehensive professional services through his land consultancy business, G.G. Runka Land Sense Ltd., offering land capability and environmental assessments, integrated resource management, land and water use conflict resolution, and interdisciplinary land use planning. Described by colleagues as one of BC's most highly respected agrologists and influential land use planners, Runka had a 52-year career working on (or against) an incredible number of landmark projects in British Columbia, such as the Site C Project. Gary Runka’s partner in life and vocation, Joan M. Sawicki, worked with Gary on many of these projects—as well as her own; her contributions are also represented throughout the records of this fonds.

Gary Runka's deep connection to the land is evident from his earliest papers on aerial photo interpretation, his work with the Canada Land Inventory, through his speeches and his work establishing the BC Agricultural Land Reserve and in his subsequent consulting career through G.G. Runka Land Sense Ltd. Gary Runka's influence and legacy was recognized in the tributes paid after his death, including the post-humus award as the Real Estate Foundation's "Land Champion" for 2014.

Digital records on storage media have been migrated. Only a small percentage of the print materials in this fonds have been digitized. Digitization requests can be made through our reproductions process; information is available by contacting archives@unbc.ca or at https://libguides.unbc.ca/archives/home/reproductions