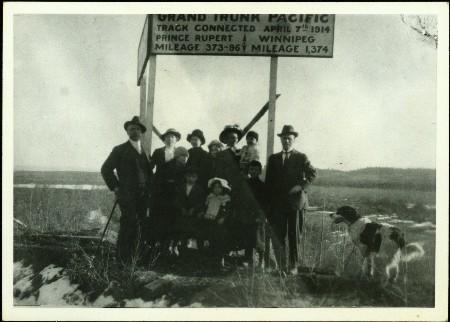 Group of men, women, and children stand in field below large sign that reads: "GRAND TRUNK PACIFIC TRACK CONNECTED APRIL 7th 1914 PRINCE RUPERT MILEAGE 373-96 - WINNIPEG MILEAGE 1,374". Two men in formal attire stand on either side of group, women and children in between. A spotted dog stands on right. It is believed that members of the Taylor family are present in group (Hermina holding infant Tom, surrounded by Violet, Lucy, Arthur, Virginia, and Dixon). Man and woman in back left speculated to be Lillian and A.K. Bourchier. Handwritten annotation on envelope of negative reads: "Ft. Fraser 1916".