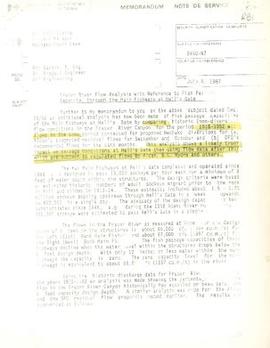 6.33 m of textual records and other material

Dr. Gordon Hartman was a highly respected figure in fisheries and natural resource management for his skill as a researcher, his integrity and vision, and his lifelong commitment to the protection of the environment.

Born in Fraser Lake, BC, on September 20, 1927, he was the fifth in a large family growing up on a hardscrabble, depression-era farm. Despite its challenges, this childhood instilled a deep connection to nature that would ultimately form the foundation of his professional life and an abiding personal philosophy centered on environmental conservation. From his beginnings as a reluctant student in a one-room schoolhouse, he ultimately journeyed to the University of British Columbia to pursue a career in fisheries. He received his PhD in biology in 1964, and embarked on a rich and diverse career in research, university teaching and fish and wildlife management that took him, and his family, across Canada and throughout the world.

After publishing his seminal graduate dissertation on salmonid behaviour and ecology, he worked with the Fish and Wildlife Branch conducting research and assisting graduate students at UBC. He then accepted a position at the University of Guelph teaching fisheries biology from 1968-72, before returning to his native BC. From 1972-77 he served as Regional Supervisor of the Fish and Wildlife Branch in the West Kootenays. During this time he took a leave of absence to spend an incomparable year with his family living in Malawi, on what would prove to be the first of several trips to work on fisheries in Africa. From 1977-80 he served as Director of Wildlife for the Yukon Territorial Government, before returning to the rewards of research as Coordinator of the landmark Carnation Creek Fish-Forestry Study.

Although Gordon officially retired from his position as a government scientist in 1986, he continued to work on many projects, including teaching and supervising graduate students at the University of Addis Ababa in 1987-88, serving as a member of the Scientific Panel for Sustainable Forest Practices in Clayoquot Sound from 1993-1995, and returning to Malawi in 1997-98 for the Lake Malawi Biodiversity Conservation Project. In 2004 he contributed to and co-edited the book “Fishes and Forestry - Worldwide Watershed Interactions and Management,” that presented fish-forestry perspectives from scientists from the world over.

Perhaps most importantly, throughout his career and his retirement Gordon felt a strong responsibility to speak publicly about the threats to fish habitat, and natural ecosystems in general, posed by major resource extraction projects such as the Kemano Completion Project, Enbridge pipeline, Old Man River Dam and others. His expertise and principled approach, combined with the scope of his vision, produced scientific assessment and commentary that was an enormous contribution to society.

Collection consists of records regarding the Kemano Completion Project collected by four scientists that were involved in the Department of Fisheries and Oceans review of Alcan’s project. The majority of the material consists of copies of publications related to the scientists’ research and activities, many of which were written or annotated by them, such as reprints of journal articles, draft scientific reports, government publications, and newspaper clippings. Original scientific research records comprise raw data, field notes, memoranda, and draft reports. Includes correspondence regarding the Nechako River court action between DFO, Alcan, and the province and scientific reports that were created in anticipation of the case. Also includes significant material emanating from the British Columbia Utilities Commission Kemano Completion Project Public Review, such as correspondence, BCUC newsletters and news releases, exhibits and evidence submitted to the review panel, documents produced for the hearings, and final reports. In addition, includes records and publications relating to various other groups affected by the Kemano Completion Project or arising because of it, such as the Cheslatta Carrier Nation, the Rivers Defense Coalition, the Nechako Fisheries Conservation Program, the Nechako Watershed Council, the Nechako Environmental Enhancement Fund, and the Nechako River Alliance.

Arranged by the archivist. Each creator’s collection of records is maintained separately, arranged in a series for each scientist. Each series is arranged roughly chronologically. Shirvell’s series (2003.4.4) is split into six subseries.

Original Department of Fisheries and Oceans records and their copyright remain with the Department or Library and Archives Canada.

Restricted files are noted throughout the file lists of this finding aid. Restrictions are applied based on the federal Access to Information Act (ATIA) and the provincial Freedom of Information and Protection of Privacy Act (FOIPPA). Access to restricted material requires an Application to Restricted Records.

All records created by the scientists after their retirement from the Department of Fisheries and Oceans may be reproduced; copyright is held by Northern BC Archives. Records created by the scientists before their date of retirement may be under Crown copyright, as they were created by an employee of DFO, and reproduction restrictions may apply. Any publications under Crown copyright may be copied without permission from government, as long as the publication does not state otherwise.