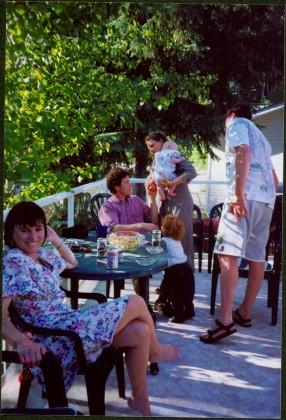 Photograph depicts two women, two men, a small child, and an infant on deck in backyard with chairs and table set with food and beverages. Trees and building visible in background. Accompanying note from Maureen Faulkner: "Ah ha! BBQ at M & T's." Photo taken on the day Bridget Moran received an Honourary Law Degree from the University of Northern British Columbia in Prince George, B.C.

Item is part of the Bridget Moran fonds.