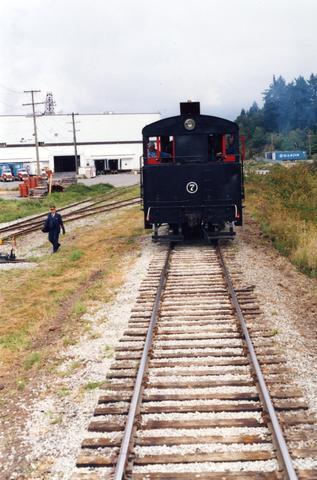 Photograph depicts a tank locomotive of the Alberni Pacific Railway backing onto its train atr the Esquimalt & Nanaimo Railway yard in Port Alberni. On the rear left were the premises of a paper mill owne dby Pacifica Papers, virtually the only used of rail services in the city. It had a sufficient volume in order to warrant having its own switcher (daily freight to Nanaimo of 40 cars). Davies notes his disbelief in late 2001 when it was stated that all freight traffic on Vancouver Island would cease on Mar. 5, 2002.