Item 2020.05.44 - Gordon Wyness by heritage artefacts and cairn in Quesnel 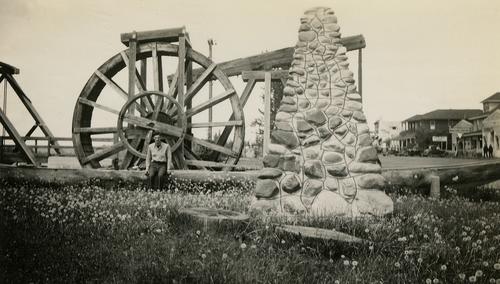 Gordon Wyness by heritage artefacts and cairn in Quesnel

Photograph depicts Gordon Wyness sitting on a historic boat, which he described as built ca. 1860 and could carry "7 Indians" and 5000 lbs of freight up the river. Located nearby is a telegraph cairn erected to commemorate the Collins Overland Telegraph lines that began in Quesnel in 1865. Until 1907, Quesnel was the terminus for the telegraph line. Behind Wyness is a replica of a Cornish water wheel that was originally located at Williams Creek in Barkerville. This location is now called Ceal Tingley Memorial Park-Heritage Corner and is located along Front Street in Quesnel, near the Fraser River Bridge. The cairn and water wheel still stand in this location, however the boat was removed around 1941.

According to additional information from Quesnel & District Museum & Archives, Wyness may have been provided with inaccurate information about the canoe depicted. The canoe believed to have been located at that spot was actually created in 1905 to pack out the Grand Trunk Preliminary Survey Team, which was led by J.M. Rolston.