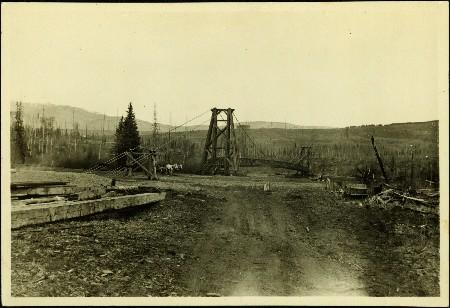 Nota sobre as publicações do editor

Handwritten annotation on recto of photograph: "Omineca Dist Walcott Suspension Bridge West Approach - looking East May 26 - 1932". Photograph depicts two white horses pulling a wagon in front of Walcott bridge. This bridge was moved from its original location in the Hagwilget Canyon, downstream from Walcott on the Bulkley River. It is a pedestrian bridge at the time of this photograph, though it was originally used by motor vehicles. Dirt road leading to bridge in foreground, with lumber and brush piles on either side. Trees and hills on opposite shore in background.

Tom Parkin, "BC Bridges: Suspenseful Links to Past" in the "Islander Magazine", 14 February 1993.