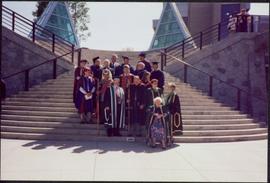 Photograph depicts group of 17 men and women posed on ceremonial steps in Agora courtyard at the University of Northern British Columbia in Prince George, B.C. Most individuals in group wear regalia. Bridget Moran stands in first row, second from right.

"A Child’s Christmas in Saskatchewan"

"A Child's Christmas in Saskatchewan"

File consists of correspondence re: draft #2 of Bridget's Rebellion from L.F. at Arsenal Pulp Press Ltd. (July 4, 1991) and an annotated draft of A Little Rebellion.

File consists of a Pulp edit of "A Little Rebellion."

A Little Rebellion: letters from people after letter to Bennett

File consists of a letter re: 1998 Order of British Columbia Recipients from Dagmar Beiman, Coordinator Honours and Awards Secretariat to Bridget Moran (May 11, 1998), a letter from Daniel Birkenbach to Bridget Moran re: a paper he wrote (Aug. 2, 1996), and a copy of paper written by Daniel Birkenbach: "Canada - Life and Development of the Canadian Indians (past and present)."

"And Then We Prayed" - Stoney Creek Woman background, interviews & thesis on Carrier People

Annual Reports from the Department of Social Welfare

Annual Reports from the Department of Social Welfare 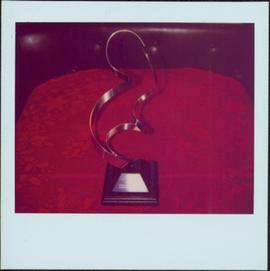 Backstairs at the Palace 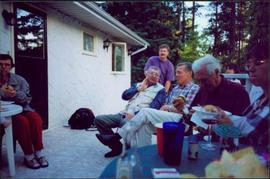 Photograph depicts group of men and women eating on deck attached to unknown house. Photo believed to have been taken during event held to celebrate Bridget Moran receiving an Honourary Law Degree from the University of Northern British Columbia in Prince George, B.C.

Beginning of "Judgement at Stoney Creek"

File consists of a copy of letter handwritten by Bridget Moran to Brian [Lam] and Linda [Field]re: Moran's inspiration and outline for "Judgement at Stoney Creek" (March 14, 1989), a copy of the article "Woman killed in Vanderhoof" featured in July 5, 1976 Prince George Citizen newspaper, and a letter from Brian at Arsenal Pulp Press regarding cover mockup for "Judgement," as well as, Moran's annotations on the received mockup. 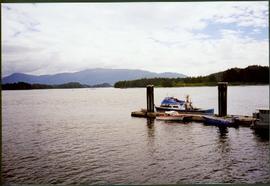 File consists of a video cassette (VHS) recording of the following clips:

(4) CKPG –TV News excerpt Date: 1993
Length: 9’17”minutes
Scope and Content: News story on the Kemano Completion Project including a brief excerpt featuring Justa Monk, responding on behalf of CSTC, to the call for a review. Anchorwoman conducts an in studio discussion with Paul Ramsay, MLA for Prince George North, regarding review process.

(6) CKPG-TV News: Newsfeed from another news office Date: unknown
Length: 2’10”minutes
Scope and Content: News story re: Kemano Completion Project and its potential affects on water levels, and fish stock, as well as mention of a federal environmental review.

[Excerpt from “The Life of Agatha Christie” biography on A&E]
[Brief excerpt from an unidentified newscast featuring sports news re: the Grey Cups] [“Mystery”, introduction by Diana Rigg for an episode of “Campion” entitled “Sweet Danger”] 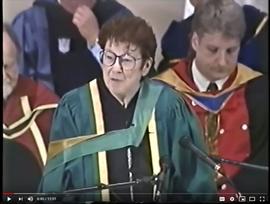 Context: DVD contains recordings originally broadcast on CKPG-TV News, the Prince George CBC affiliate station. It contains multiple recordings of either interviews with Bridget Moran or TV broadcast announcements and news stories relating to Moran’s publications and awards; as well as an excerpt from the May 1995 UNBC Convocation Ceremony featuring Moran’s Convocation Address.

(5) UNBC Convocation Address Date: May 26, 1995
Length: 11’53”minutes
Scope and Content: UNBC president Geoffrey R. Weller introduces Bridget Moran who then delivers her Convocation Address to the students of the May 1995 graduating class. Her speech focuses on change
– positive change - in the realm of education.

File consists of a recorded audio interview on CBC: All in a Day. All in a Day is an Ottawa-based radio program in existence since c.1975 described as “Ottawa’s drive home radio show brings music, news, current affairs, culture and conversation to listeners at the end of the work day”. This radio broadcast feature entitled “The Other Shelf” was hosted by Paul Mackan.

Scope and Content: Radio announcer Jennifer [?] introduces CBC radio broadcaster Paul Mackan in an episode of “The Other Shelf”, during which he provides a review of Bridget Moran’s books Judgement at Stoney Creek and Stoney Creek Woman and also provides a review of a third book, Aboriginal Peoples and Politics, by Paul Tennant. Mackan describes Moran’s books as ‘a great banquet’ that speaks to the strength of the human heart. He describes the story of Mary John as told to Bridget Moran; Mary John, a Carrier Indian woman, born in 1913 who describes growing up in poverty and prejudice in Stoney Creek, BC. Paul is intrigued by the ‘native way’ of storytelling and how it involves the listener in the story; and how Native people speak of events that happen to ‘our people’ – that tragedies are a shared experience. Judgment at Stoney Creek, Paul describes as a “tale of native people facing justice system in 1976’ and notes that Moran states this was the first case of prejudice in the justice system to reach national prominence. Mackan explains that the Native People of Stoney Creek had to fight to get an inquest into the accident which killed a 9 month pregnant native woman. Mackan notes that both of Moran’s books are recommended reading for high school students in both BC and the Yukon.He then proceeds to review Tennant’s book. He notes that all 3 books come at a significant time in white-native relations in Canada and refers to the Oka Crisis. He concludes that we must not only do “justice” by Aboriginal Peoples in Canada but “we must do ‘right’ by Aboriginal Peoples in Canada 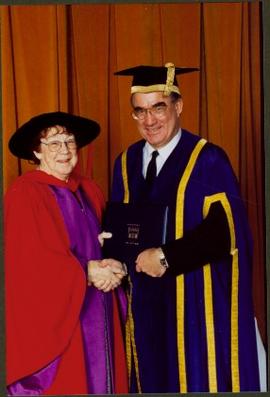 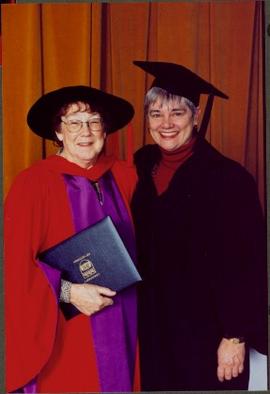 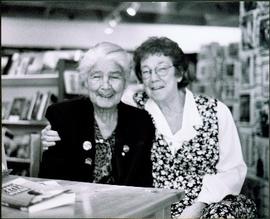 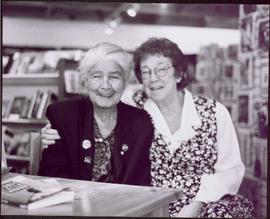 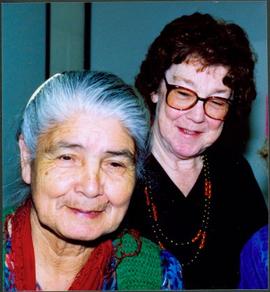 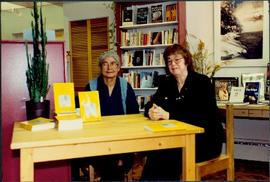 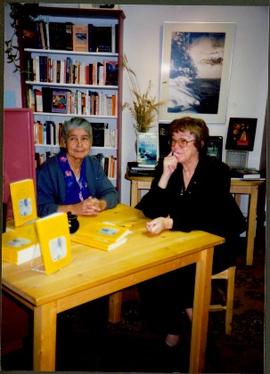 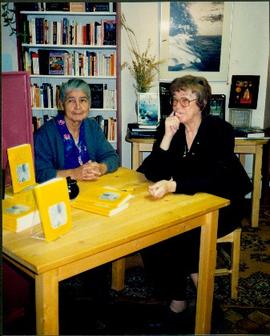