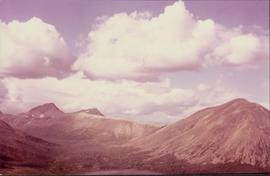 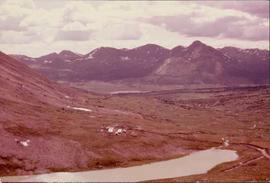 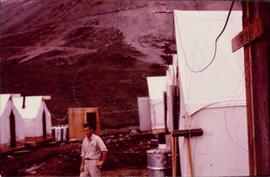 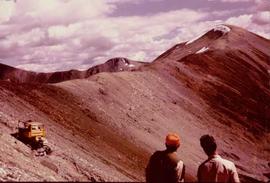 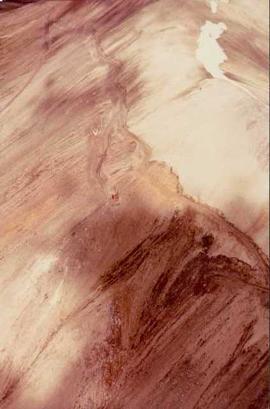 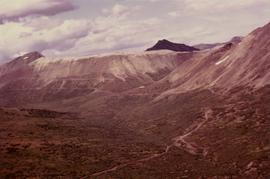 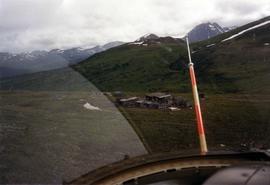 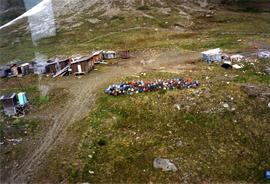 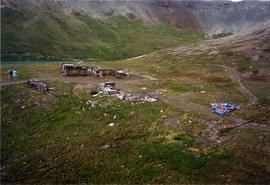 This collection is of Kutcho Creek Camp that was set up by a crew led by Cassiar's Chief Geologist Bill Plumb in 1966.

There are six photographs showing the temporary buildings, paths and barrels. These photos were taken from a high hill looking down at the camp. Two photographs depicts the valley of Kutcho Creek area, and the exploration camp is in the distance at foot of hill. One photograph depicts valley of Kutcho Creek area with a body of water in foreground, and mountains in background.
Another photograph depicts man believed to be Matt Bell standing in Kutcho Creek exploration camp. There are tents on either side, a wood structure in background and a sign on wood post: "PLUMB BLVD."
One photograph believed to have been taken near Kutcho Creek, during the initial exploration trip led by Cassiar's Chief Geologist Bill Plumb. Bill stands to left of man believed to be Matt Bell in right foreground. Bulldozer works along talus slope in left foreground.
Another photograph of this initial trip shows a bulldozer working along talus slope in centre of image.

Personal or academic use of photographic materials is welcomed under the standard fair use and educational use clauses of Canadian Copyright Law. Commercial use is, however, forbidden without the express permission of the copyright holder. For information on obtaining written permission from the copyright holder, please contact the Northern B.C. Archives and Special Collections

These photographs are linked to exploration of Bill Plumb 2000.1.1.1.7