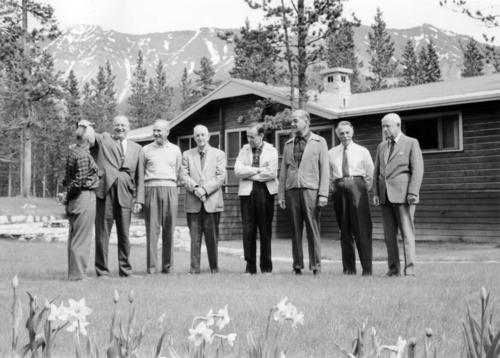 Photograph depicts group of eight men standing on lawn in front of building known as "House 130" or "Director's Lodge". Left to right: Nick Gritzuk, Charles Rainforth Elliot, Jack Christian, W. Harold Connell, Plato Malezemoff (from Newmont Mining), Tam Zimmermann, Ken A. Creery, Fred Martin Connell. Elliot appears to be comparing height with Gritzuk. Trees and mountains in background. Most men featured in photo are believed to be members of Cassiar's Board of Directors.

Handwritten annotation on recto of photograph: "11".