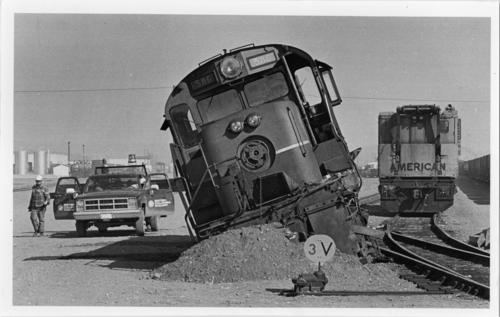 Photograph depicts B.C.R. locomotive # 586 derailed with two men arriving in a company truck. Gravel and switch is visible in the foreground while industrial storage tanks are visible in the background. Photographer: "Brock Gable" stamped in red on verso. Typed note on verso reads: "When we say May Day, we mean May Day.......specifically May1, 1985. Our locomotive, BCR # 586 made the front page of the "Citizen" that day. though not the way anyone intended. In fact, it was downright embarrassing and unflattering. Nearing the end of its career, # 586 was involved in a minor hist and run in the BCR yard and parted company with the rails. As is evident in the picture, BCR's big hook" is standing by and help is on the way. No! we don't know if anyone got the other guy's license. (Photo Credit: Brock Gable ///Citizen). Part of a set of 13 black & white photographs of British Colombia Railway & it's precursor, Pacific Great Eastern Railway (1912 - 2004) in British Columbia. Photos depict locomotives, railroad cars, and crew members. «