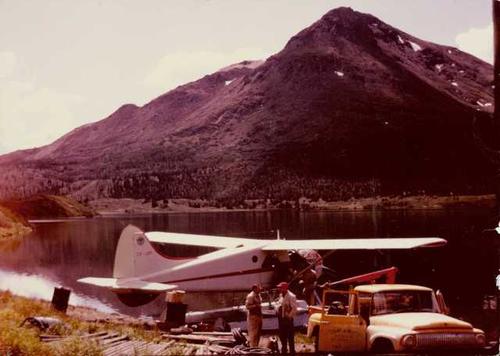 Photograph depicts Cassiar's Chief Geologist Bill Plumb and unidentified man standing on shore by yellow Cassiar supervisor's truck. Airplane is parked on lake behind them, and miscellaneous equipment lies on shore at Bill's feet. Photograph speculated to have been taken at Aeroplane Lake, approximately 35 miles east of Cassiar. Bill Plumb led many expeditions for the purposes of Cassiar's outside exploration endeavours.

Contact archivist for more information in research file pertaining to this photograph.