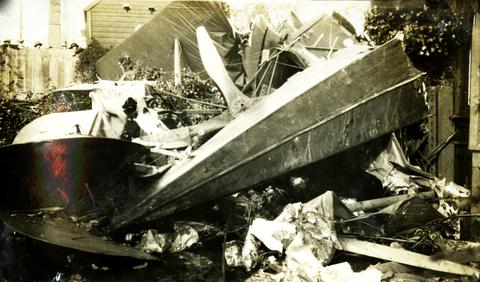 Wreck of an airmail plane

Photograph depicts a wreckage of a small airplane. Handwritten annotation below the photograph reads, "wreck of an Airmail plane". This photograph may depict the plane crash that occurred in October 1926 in which a Victoria-to-Seattle airmail plane piloted by Gerald Smith crashed into the home of Senator Robert F. Green on 502 Rupert Street in Victoria, BC.

This photograph has been digitized and is available in JPEG format by clicking on the image at the top of this page. For a full quality digital reproduction, contact archives@unbc.ca. Any use of this digital image requires use of the following credit line: Northern BC Archives, UNBC Accession No. 2009.10.1.22