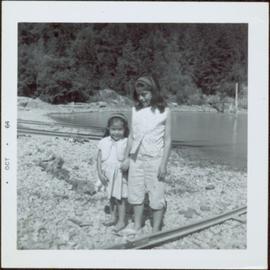 Two unidentified, young First Nations girls stand hand in hand on a rocky beach. Rail tracks extending from the water to the shore are visible in the lower right corner and in the background. Handwritten annotation on verso reads: “Kingcome Reserve”

Collection consists of 140 photographs pertaining to the life and pursuits of James Joseph Claxton over the course of sixty years. Subject areas identified within this collection include: quartz and placer mining in the Cariboo; Kingcome Village; the Royal Irish Contabulary; Roderick's Jewelers, New Westminster; the "M.S. Columbia III"; Kwakiutl petrographs in Fort Rupert; totem poles at Alert Bay; and the Salmon Arm Boy Scouts of Canada group.

This file consists of 3 photographs featuring various perspectives on Kingcome Inlet, such as the interior of St. George's Church (Anglican); totem poles; and children on the beach. 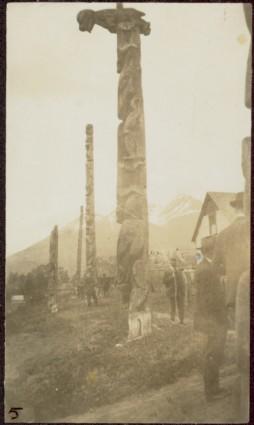 Unidentified people stand around and between totem poles. A row of buildings and snowy mountain peaks are visible in the background. Location is believed to be Kingcome Indian Village 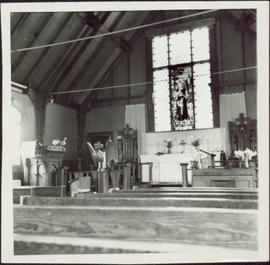 Photograph features interior perspective of the front of this Anglican church as seen from the nave. A large stained glass window, a carved Thuderbird lecturn and the altar are visible.