Map depicts annotations of the freight-way routes throughout British Columbia. These routes include: the Garnet Enterprise Truck Haul from Vancouver to Terrace, the Canadian Freightways from Vancouver to Edmonton to Alaska; the Lindsay Transfer from Terrace to Dease Lake and Telegraph Creek; and the Northland Navigation roll-on and roll-off service.

Map depicts the city of Vancouver and its railways. 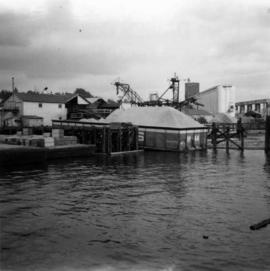 Photograph depicts a scow with chips landing on the north shore of Vancouver harbour. There are Saskatchewan wheat elevators in the background. 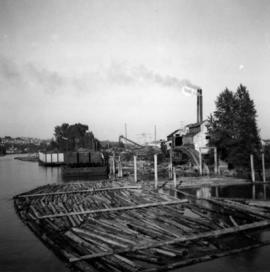 Lumber mill on the Fraser River

Photograph depicts a mill on the north stream of the north arm of the Fraser River, looking east from the Fraser St. bridge. 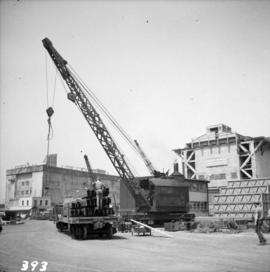 Photograph depicts a steam crane at the Allied Shipbuilders Ltd. on 145 West First Ave in Vancouver, BC 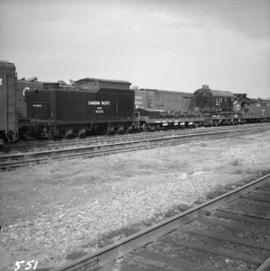 Images within album consist primarily of fishery industry, river & landscapes, salmon cannery images (housing, people, workers, boats) on the Nass River and North Pacific Coast, ca.1924-1926. Each photograph is accompanied by a handwritten description glued below or beside the image.

This bound photo album comprises 122 photographic images featuring the fishing industry, river & landscapes, salmon cannery images (housing, people, workers, boats, machinery) and First Nations Peoples on the Nass & Skeena Rivers and North Pacific Coast. Images also include warships, freighters, automobiles, railway stations and trains, and some photographs of Yokohama, Japan and California ca.1924-25. Includes photographs of the 1924 Special Service Squadron World Cruise in Vancouver. Each photograph is accompanied by a handwritten description glued below or beside the image and each image is glued to the album page at its corners. The verso of front cover has a handwritten name plate: 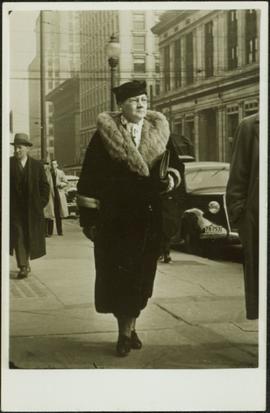 Sarah Glassey on Hastings Street in Vancouver, BC

File contains photographs pertaining to the transportation of asbestos fibre. 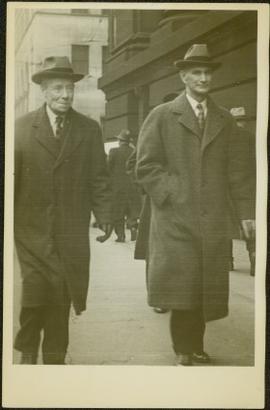 H.F. Glassey & Friend on Hastings Street in Vancouver, BC 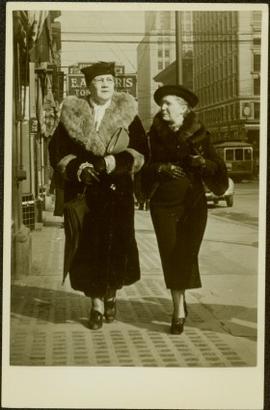 Sarah Glassey & Friend on Hastings Street in Vancouver, BC

The pair walks on sidewalk, wearing hats and fur lined coats, Glassey on left. Car, power lines, and tall buildings stand in background. Photograph believed to have been taken by street photographer.