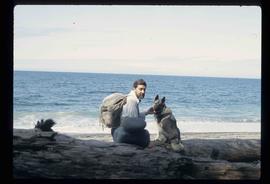 Image depicts Kent Sedgwick sitting on a log with a dog on a beach somewhere in Haida Gwaii, B.C. 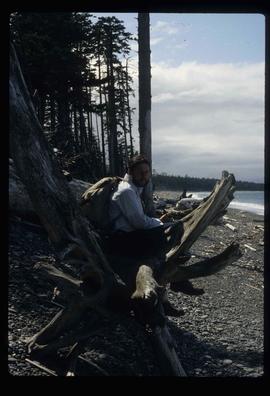 Image depicts Kent Sedgwick sitting on a log on the shore of Haida Gwaii, B.C. 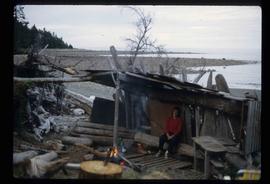 Shack on a Beach

Image depicts a woman, possibly Sue Sedgwick, sitting in a shack on a beach on Haida Gwaii. 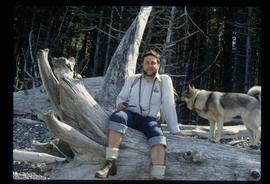 Image depicts Kent Sedgwick sitting with a dog on a log on the shore of Haida Gwaii, B.C.

Joyce Collison with Colonel on North Beach at Masset, Queen Charlotte Islands, BC

The pair stands on beach, Joyce leaning down in foreground (daughter of Bertha and Reverend W.E. Collison, and granddaughter of Marion and Archdeacon W.H. Collison). Water and shoreline in background. 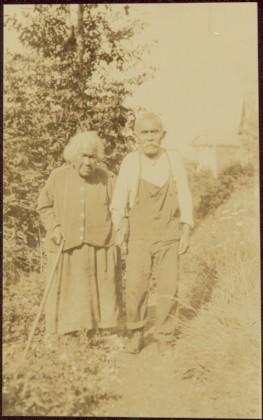 The couple walks arm in arm along dirt path in grass, buildings visible in background. 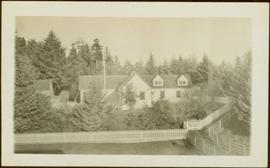 Photographs depict large building in fenced area, trees in yard and in background. 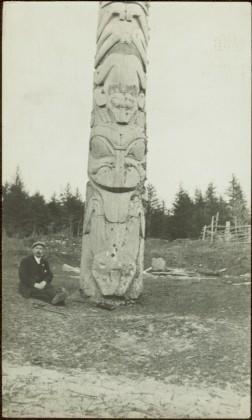 Rev. W.E. Collison sits to left of totem pole, smoking a pipe (oldest son of Marion and Archdeacon W.H. Collison). Log fence can be seen in front of forest in right background. 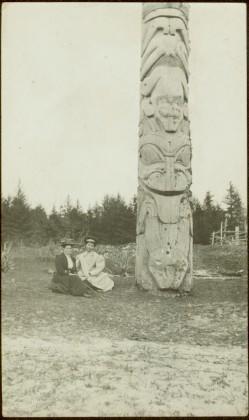 The pair sits on ground beside large totem pole, Bertha on left (wife of W.E. Collison). Log fence can be seen in front of forest in right background. 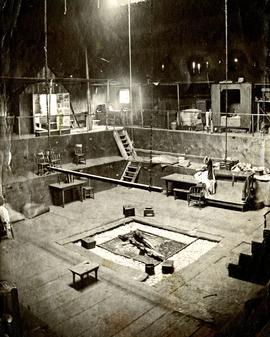 Interior of chief's house in Masset, Queen Charlotte Islands, BC

Caption under printed version of photo in W.H. Collison's book 'In the Wake of the War Canoe': "The house is about 40 feet square, forming one large room. The upper cubicles are on a level with the ground, which in front of them is excavated so that the fireplace in the centre is twelve feet below the surface. A ledge, for the use of slaves and dependents, is left half-way down." 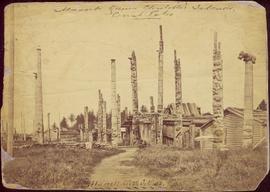 Photograph depicts many crest poles in front of wooden homes. An unidentified family can be seen sitting by house in centre. Wood pile and path in foreground.