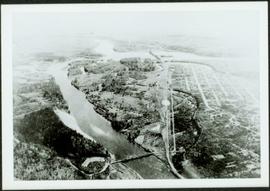 Aerial view of Prince George featuring roadways and the confluence of the Fraser and Nechako rivers. 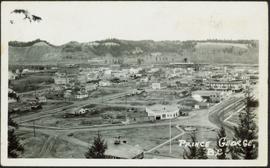 Photograph depicts the major buildings and streets of the town. Sloped cutbank visible across the Nechako River in background. It is believed that this photograph was taken from Connaught Hill. Handwritten annotation on verso of photograph reads: "PRINCE GEORGE, B.C."