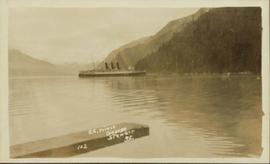 S.S. Prince George docked in the Portland Canal, BC