Consists of a copy of an audio recording of Tex Hanson at Kleena Kleene, BC. 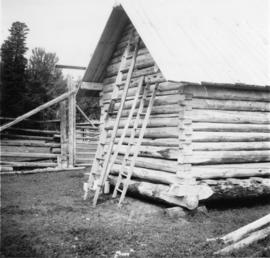 Photograph depicts a small barn that had just been built within the last 12 months.

Fonds consists of the personal records of Nedra (Ginty) Jane Paul [b. ca.1920-d. 1990]. Personal records include the 1938 Lord Byng High School Annual, 2 teaching certificates, and 1 photograph. Paul worked as a teacher in the Chilcotin and Bella Coola regions of BC and the primary items of the collection are 8 recordings generated by her with members of First Nations Communities at Alkali, Red Stone, Kleena Kleene and Bella Coola from 1964-1971. There are 8 original audio reel to reel recordings (and 2 tapes which are copies of the recordings later created by P.J. Thomas, who accompanied Paul on the interviews). Recordings include stories and songs.