"Historic Railways of the Lower Mainland of British Columbia" 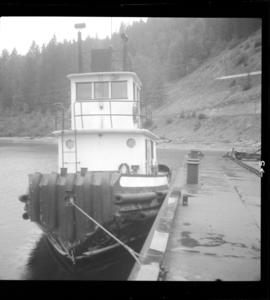 Photograph depicts a privately owned tug of the Interior Lake Services called "Iris G." It was used to haul rail barge #6 between Slocan and Rosebury on Lake Slocan. It was in 1956 in New Westminster.

File consists of material regarding the movie, "Iron Road", which was a Chinese-Canadian co-production filmed in the Kamloops area in June 2007. Predominantly consists of photocopy reproductions, pamphlets, news releases, and clippings f... 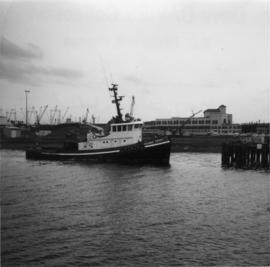 Photograph depicts the "Island Chief" tug of the Island Tug and Barge Company, off pier A3 (CPR) in Vancouver. 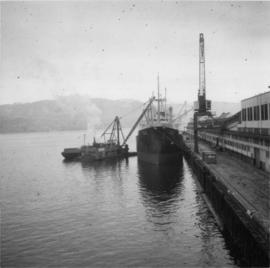 Photograph depicts containers being hoisted onto "Japan Line" by means of a steam derrick (owned by Mckenzie Barge and Derrick Co. Ltd.) tied alongside scow holding containers. Davies notes that this was an unusual sight. 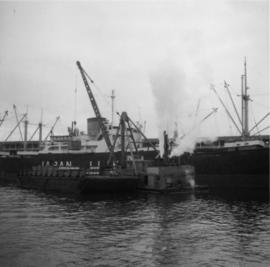 Photograph depicts a steam floating derrick (owned by Mckenzie Barge and Derrick Co. Ltd.) loading contariners from a scow into the hold of "Japan Line." Use of the crane on the non-deck side of a ship was unusual and the use a steam cra...

Plan depicts the location of buildings occupied by the Northern Construction Company on the old Kamloops Station ground.

Map depicts the city of Kelowna and area. Annotated by Davies to emphasize rail lines.

Technical drawing of Kettle Valley Railway depicts trackage and a gradient profile for the line. 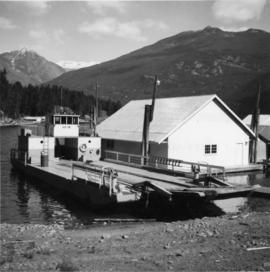 "Linking the Atlantic to the Pacific, Ocean to Ocean: Montreal Greets Vancouver, 23rd May, 1887"

File consists of a pamphlet published by the City of Vancouver Archives commemorating the arrival of the first trans-Canada train from Montreal to Vancouver.

Map depicts locations of all mining properties in British Columbia. Includes index with names of owners of properties.

"Location of Bridge and Borrow Pit" at Lyon Creek

Plan depicts the location of the Lyon Creek Bridge and borrow pit on the CNR Clearwater subdivision. 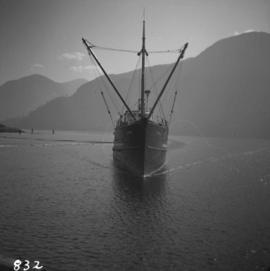 File consists of issues of no. 492 of Canadian Rail magazine, which features Davies' article, "Maintenance-of-Way in British Columbia, 1890 to 1980". 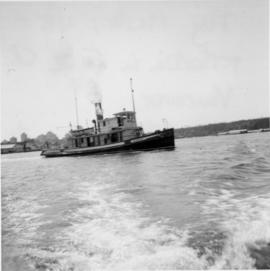 Photograph depicts a "Master" tug after it underwent restoration in False Creek, Vancouver. It was under steam, and entering English Bay.

"McCulloch's Wonder: The Story of the Kettle Valley Railway"

File consists of a publication by Barrie Sanford entitled "McCulloch's Wonder: The Story of the Kettle Valley Railway".

"Mining Railways of the Klondike" 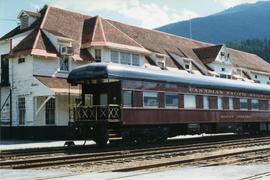 Photograph depicts close up of the car named "Mount Stephen," built in 1926. It was one of the cars that comprised the President's train that stayed in Nelson for the first weekend of August, 1997 during the city's centennial c... 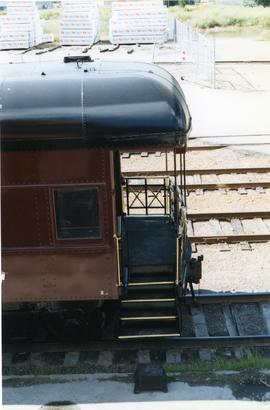 File consists of copies of Davies article, "Moving Livestock by Rail: An Inquiry into an Extinct Traffic", which was published in the Spring 2006 issue of The Sandhouse. 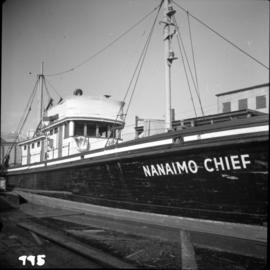 "New Catechism of the Steam Engine with Chapters on Gas, Oil and Hot Air Engines"

File consists of the 1904 edition of a textbook by N. Hawkins entitled "New Catechism of the Steam Engine with Chapters on Gas, Oil and Hot Air Engines".

Plan depicts architectural drawings of the Canadian National Railway station in Kamloops. Includes an elevation of the building and floor plans.

"No Horsecars in Paradise: A History of the Street Railways and Public Utilities in Victoria, British Columbia before 1897"

File consists of a publication by Douglas V. Parker entitled "No Horsecars in Paradise: A History of the Street Railways and Public Utilities in Victoria, British Columbia before 1897". 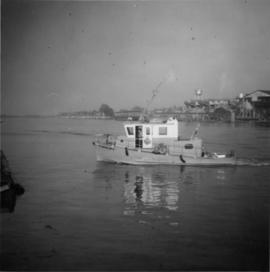 File consists of a May 1952 special edition of the Northwest Digest that features the Pacific Great Eastern Railway.

"Not 'A Bridge Too Far' But One Far Enough: How the G.T.P. Crossed the Fraser at Prince George, British Columbia"

File consists of issue no. 476 of Canadian Rail journal, which features Davies' article, "Not 'A Bridge Too Far' But One Far Enough: How the G.T.P. Crossed the Fraser at Prince George, British Columbia". 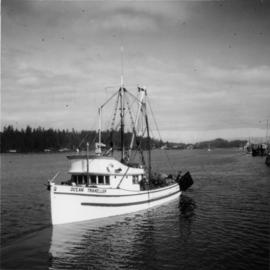 Photograph depicts a vessel called the "Ocean traveller." It was backing off from a public pier in Ucluelet. 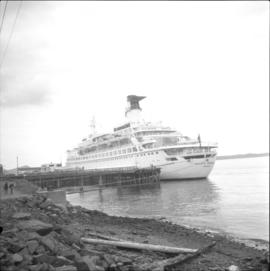 Photograph depicts a liner called the "Pacific Princess." It was built in 1971 in West Germany. The liner was one of the 8-day summer crusises that travelled from Vancouver to Alsaska. Owned by P & O and registered "London."

"Plan Showing Proposed Location of Station, Crossing of Cawston Ave and Street to be Closed, Yard Layout and Connections with C.P.R., Kelowna, B.C."

Plan depicts a proposed location for a CNR station and crossing in Kelowna.

Plan depicts the proposed location and layout for the Canadian Northern Pacific terminal at Kamloops on the Kamloops-Lumby branch.

"Plan Showing the Growth of Vancouver's Street Car System as from the Laying of the First Tracks in 1889 to the Last Section Laid (Clark Dr., Hastings to Venables)"

Map depicts the growth of Vancouver's street car system as from the laying of the first tracks in 1889 to the last section laid (Clark Dr., Hastings to Venables).

Plan depicts the CNR rail yard in Kamloops. The plan was originally drafted on March 6, 1928 and updated to July 1937.

"Plan of Proposed Connection at Kamloops with C.P.R."

Plan depicts the Canadian Pacific Railway yards in Kamloops and the proposed connection between CPR and CNR. Includes a CPR track profile, profiles of street crossing, and enlargements.