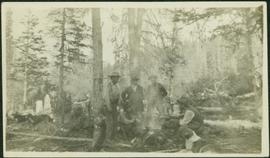 Photograph depicts six men around fireside in forest, trees felled on either side. Bob Potts sits on far right, next to dog in foreground. These men are believed to be members of A. K. Bourchier's crew on the Upper Fraser River. Handwritten annotation on recto of photograph: "Preparing The miday meal. frying Bacon on sticks. Potts. Chief Chef." 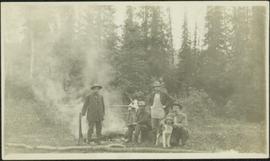 Bob Potts with Crew in Camp

Photograph depicts four men around fireside in forest clearing. A man believed to be Bob Potts kneels on far right, next to dog. These men are believed to be members of A. K. Bourchier's crew. Handwritten annotation on recto of photograph: "The Last of a Comfortable Camp." 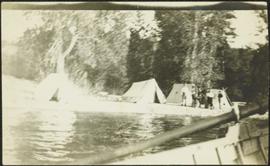 Photograph depicts men standing on shore in front of tents, forest trees in background. Photograph was taken from a boat; portion of boat and oar are visible in foreground. Handwritten annotation on recto of photograph: "View of all four tents."