This series consists of 303 black and white photographs (and computer disc copies) documenting Prentiss Gray's evaluatory trip along the BC/Alberta border in 1928.

Series consists of 7 mini DVs recording "Exploring Our Roots: Forest History in Our Communities Annual Conference of the Forest History Association of BC" at UNBC in Prince George, September 18-19, 2009. Harry Gairns and Mike Apsey spoke and conference panel topics include:

This series consists of 191 black and white photographs (and computer disc copies) of Prentiss Gray's month-long trip on horseback when he travelled north from Jasper Park to Willmore Park. This series also includes 1 map identifying the trip route from Jasper Park, north.

Series consists of material related to Weller’s activity obtaining and completing the responsibilities of his academic appointments.

The Norah Banbery Doherty fonds consists of 6 photographs of Norah and Irwin Doherty at Red Rock and on board the ship to Canada, 3 copies of articles written by Norah Banbery Doherty, and 1 copy of a letter written to N.L. Banbery by J.A. Warren, Director of Education, County Borough of Wolverhampton

Norah Banbery Doherty fonds consists of the original typed manuscript entitled "A Man's Country" by Norah Doherty, as well as 1 copy of the manuscript & 3 colour photographs of Doherty

Fonds consists of 1 box audio recordings and transcripts of interviews conducted by Prince George Oral History Group in 2002 and 2003 for their website.

This fonds consists of 4 audiocassettes and 1 bound transcript of Jeanne Anderson being interviewed by Clare Willis.

Fonds consists of 1 floppy disc and 2 audio recordings of an interview with Anne Fanshaw.

Series consists of textual materials documenting the incorporation and organization of the Interior University Society including organization charts, lists of directors, financial statements, a copy of the certificate of incorporation, a transparency and miscellaneous textual records.

Series comprises incorporation documents, constitution, financial reports, an organization chart, annual report, lists of Society members and biographies and c.v.’s of some members of the IUS Board of Directors.

Series consists of records relating to the management and administration of the Aleza Lake Research Forest.

Series consists of materials related to the oral history related by to Debbie Nowak by Allan and Gladys Thorp. Includes four audio recordings, each of which has an accompanying copy.

Series consists of 2 transcripts of an interview of Anne Fanshaw by Ramona Rose, Archivist at the University of Northern British Columbia.

Series consists of a photograph album from A. H. Holland, a British Columbia Land Surveyor, that was created while working in the Central Interior, the Cariboo, the Chilcotin and southeast British Columbia. This album visually documents steamboat, stagecoach and horse travel in British Columbia and also captures the prepatory work and dawn of the age of rail travel.

Series consists of UNBC-related ephemera, artifacts, and paraphernalia created by the UNBC Office of Communications for promotional or display purposes.

Series consists of objects such as posters, t-shirts, and artwork collected or created by the UNBC Office of Development.

Series contains audio recordings taken by Nedra (Ginty) Jane Paul of stories and songs from First Nations people and other residents of Northern BC.

Series consists of original audio reels of CKPG radio programming broadcasts recorded in Prince George from 1960 to 1979, as well as, dubbed audio cassette copies made by the Prince George Oral History Group.

Series consists of sound recordings and video recordings created by or for Brian Fawcett.

Series contains audiovisual recordings created by or about UNBC.

Series consists of video recordings and broadcast shows created by the UNBC Office of Communications and their partners.

File consists of 6 videocassettes of the construction of ceremonial mace, chairs, and Senate doors for the University of Northern British Columbia.

Series consists of background material collected by Bill Morrison for his research. Includes academic papers, magazines, and other publications.

Series consists of miscellaneous documents and reference material created by or sent to the British Columbia Utilities Commission regarding the Kemano Completion Project review hearings.

Series consists of records pertaining to the creation of the biography “Forests, power and policy: the legacy of Ray Williston” by Eileen Williston and Betty Keller. Types of records include: transcripts of interviews, one audio cassette, and other printed material on Mr. Williston’s life and accomplishments.

Series consists of Board of Governor records.

The Cassiar Asbestos Corporation and townsite records encompass a massive archival holding of approximately 1,600 bankers boxes. A box level inventory was created by student employees of the archives over a 15-year period. This inventory is provided here for access purposes only and its accuracy cannot be guaranteed.

In 1952 the Cassiar Asbestos Mining Corporation constructed an asbestos open-pit mine and mill and created a town site for its workers that became the town of Cassiar, British Columbia, 50 miles south of the Yukon border, and 80 miles north of Dease Lake. For 40 years Cassiar was a thriving asbestos mining town with a population at its peak of about 2500, with production statistics for 1989, recording over 60 million tonnes of ore mined, producing a billion dollars of new wealth. In 1989 Cassiar added an underground mine to the site, and despite attempts to run it profitably, in 1992 the entire mine closed partially due to the global market decline in the demand for asbestos, resulting in the closure of the town, and the move of its workers and families out of Cassiar. An auction was held to sell off all the mining equipment, townsite infrastructure, its buildings, people’s residences and the site was bull-dozed, with many houses burned to the ground. Today little remains in this remote area of Northern British Columbia to mark Cassiar’s industrial, economic or social history.

In 1992 the University of Northern British Columbia acquired the holdings of CAMC and the Cassiar townsite recognizing its potential for academic research, as the records could provide insight into natural resource industry extraction operations in Northern BC from mid to late 20th century, illustrative of ‘boom & bust’ industries, and to provide context to the development of the Cassiar Asbestos Mining Corporation and the history of the ‘life’ of a one-industry company town. The holdings document mining operations by CAMC and of the town site of Cassiar, originally consisting of the equivalent of 1800+ bankers’ boxes, including records on construction, engineering, operations, administration of CAMC, tallies of extractions, labour and union activities, corporate events and visits by dignitaries (including Prime Minister Trudeau who visited CAMC’s northern operations unit in Clinton Creek in 1968 and M.P. Iona Campagnolo in 1978). As CAMC was owner of both the mine and the Cassiar town, the company provided municipal services (i.e. sewer, water, and electricity) for its workers and their families. The archived municipal records document townsite construction, including the creation of health, education and community services such as Cassiar’s private hospital, school, library, community centre, hockey arena, and retail store. The holdings also include extensive visual documentation of natural and man-man landscapes within this remote and scenic area of Northern British Columbia. The formats of the archival holdings are diverse consisting of textual, photographic, cartographic materials, electronic records, films, promotional video-recordings, and a near complete run of the Cassiar community’s print newspaper.

Series consists of the brief given to the BC Cabinet on October 13, 1988 concerning regional development and the role of a Northern university, correspondence and other miscellaneous printed matter.

Series consists of material regarding the BC Electric Railway (1897-1961) and its successor, the BC Hydro Railway (1961-1989). Includes information about BCER interurbans, the Granville Island street railway, and the Nelson Electric Tramway. 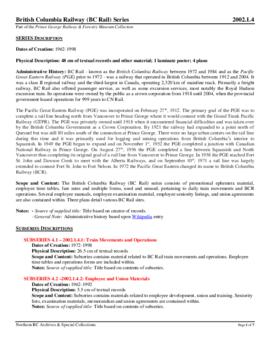 The Canadian Centre for Policy Alternatives (CCPA) is an independent, non-partisan research institute concerned with issues of social, economic environmental justice. Founded in 1980, the CCPA is one of Canada’s leading progressive voices in public policy debates. The CCPA publishes on a wide range of social, economic and environmental issues in formats that include research studies, short commentaries, articles in "The Monitor" (monthly national research magazine) and monographs. It is believed Mr. Taylor collected these publications to further his own research interests. For more information on the CCPA please visit <a href="http://www.policyalternatives.ca/">http://www.policyalternatives.ca/</a>.

This series consists of CCPA monographs, articles, research studies and issues of "The Monitor" magazine.

Series consists of records related to the creation and early administrative history of the Cariboo Section of the Canadian Institute of Forestry. Series includes reports, meeting minutes, membership lists, and extensive correspondence.