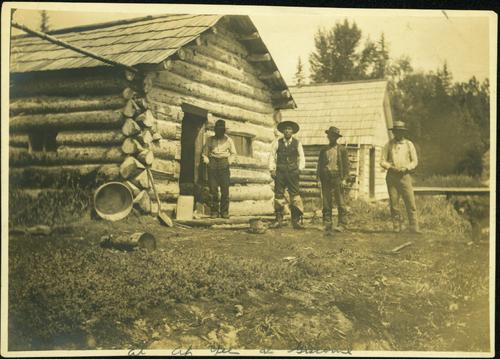 Photograph depicts four men standing in front of two log cabins. It is believed that these men are also featured at Meikle's Cabin in item 2009.5.3.17. Forest in background, miscellaneous items on ground in yard. Handwritten photo caption on verso and recto of this photo reads: "at Ah Yee at Giscome." It is believed that Ah Yee was the first Chinese store keeper at Giscome Portage in 1910.

Chow, Lily. "The Chinese Community." In A Report on the Quality of Life in Prince George. Prince George: Institute of Social Research and Evaluation, 1997.