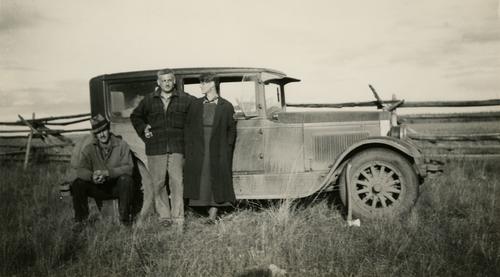 Photograph depicts (from left to right) Gordon Wyness, Philip Monckton, and Lavender Monckton by their 1930 Buick Series 40 car in the Williams Lake area. In this image, the car may be broken down; Wyness noted that they "were forced to spend the nite in a school house due to condenser burning out in the car". Wyness also noted that they had "just finished tying in Fraser Mtn", suggesting that they had just completed survey work in the Fraser Mountain area.